If you've ever seen the 2006 thriller Blood Diamond starring Djimon Hounsou and Leonardo DiCaprio, you already know a little about conflict diamonds, as the movie was based on (some) actual events. As a result of some of those events, the problem of conflict diamonds is now addressed on a global scale, and today, more than 99% of the world's diamonds are conflict-free. 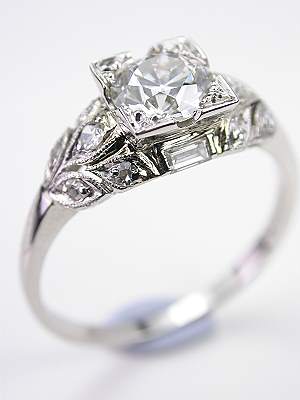 No one wants to wear jewelry that may have contributed to war, or been the result of a captive person's work. This is especially true for wedding jewelry that has such special meaning, and that you'll wear for the rest of your life. Aside from being beautiful, vintage engagement rings can also be a small part of the solution to the conflict diamonds issue.

What are Conflict Diamonds?

A few countries around the world are home to diamond mines, including Russia, Australia and Canada. However, roughly $8.5 billion worth of diamonds come from Africa, mined in several countries. It was civil war and other conflicts in some of these countries that brought about the conflict diamond phenomenon.

For example, starting in 1991, a group known as the Revolutionary United Front (RUF) began an attempt to overthrow the sitting government in Sierra Leone. This was the start of numerous bloody battles, transfers of power, and a war that lasted 11 years.

During this time, the RUF took control of large areas of land across Sierra Leone, many of which contained diamond mines. The RUF forced captives-including many children-to work in these mines. The group then used the diamonds to fund their war efforts, often trading them directly for weapons.

The misuse of this precious natural resource wasn't restricted to Sierra Leone. Diamonds have also been used by rebel groups to fund conflicts in Angola, Ivory Coast, Liberia, the Democratic Republic of Congo, and the Republic of Congo.

Sadly, because so many people died during these civil wars and conflicts, the gemstones that came from these countries during those periods are called blood diamonds. Because the stones were used to fund civil war and other conflicts, they're more often referred to as conflict diamonds.

How Was the Conflict Diamond Issue Addressed?

In July 2000, near the end of the civil war in Sierra Leone, leaders in the diamond industry met to discuss diamond mining and human rights violations. As a result of this meeting, the World Diamond Council (WDC) was created.

The WDC was tasked with developing and implementing a system to track the import and export of rough diamonds (gemstones in their natural form, that have not yet been cut, faceted or polished), in an effort to prevent their being used for illegal purposes.

How Does the Kimberley Process Work?

Members of the Kimberley Process System must adhere to strict requirements in order for the rough diamonds they ship to be certified as "conflict-free." For example, participating nations must have certain legislation in place, controls on imports and exports, and must agree to share their statistical data. 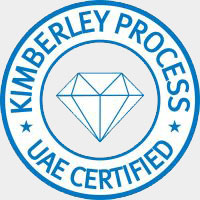 The members of the Kimberley Process publish annual reports which list statistical data regarding the production and trade of rough diamonds, and make these reports available to the public.

One of the strictest rules imposed by the Kimberley Process is that participants may only trade with fellow participants who have also agreed to and met all the requirements.

Since the Kimberley Process was put in place, the amount of conflict diamonds flowing through the legitimate marketplace has been reduced from approximately 4% to less than 1%. The diamond industry continues to work toward completely eradicating conflict diamonds from the supply chain.

The short answer is no. The period during which conflict diamonds were produced began in the early 1990s. What we consider antique and vintage engagement rings were created in the 1970s or earlier.

When you buy a vintage engagement ring-or any vintage jewelry that contains diamonds-you can rest assured that your jewelry was never a part of such strife.

We do not support the role that conflict diamonds have played in funding armed conflict in Africa. We do applaud the good things diamond mining brings to African nations, such as improved health care, free education, and more jobs.

Upon request, our Conflict Diamond Guarantee will be included with your jewelry purchase.