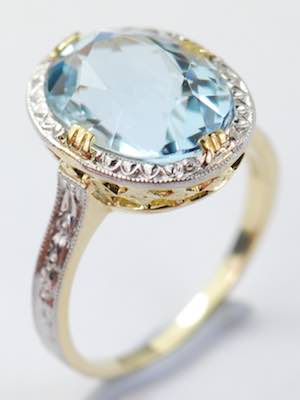 Even in its rough form, before it's been faceted and polished, the aquamarine is a beautifully clear, blue gemstone. Once it has been polished, though, its beauty and allure make it one of the most popular jewelry gemstones in the world. Its name comes from the Latin aqua marinus, meaning "water of the sea," and for good reason. Gazing upon it conjures images of a clear, blue ocean. This gorgeous stone has seen a resurgence in popularity, particularly in aquamarine engagement rings. Once you know more about it, it's easy to understand why.

Possibly the most interesting fact about the aquamarine is that it's actually the mineral beryl. Pure beryl is clear, but the presence of certain elements during the formation of the stone can produce a variety of colors. For example, the inclusion of chromium in a beryl crystal creates a deep green color, and it becomes an emerald. An aquamarine is produced when iron is present in a beryl mineral. Depending on the amount of iron present, an aquamarine can range in color from pale to deep blue.

Aquamarine gemstones are mined in such locations as Brazil, Nigeria, Russia, and the United States. The aquamarine is softer than a diamond, but still a fairly hard stone, measuring from 7.5 to 8 on the Mohs Scale of Hardness. Also like diamonds, their quality is assessed through the use of the four Cs: color, clarity, cut, and carat weight.

The aquamarine is not only the March birthstone, but is the gem designated to be given for the 19th wedding anniversary. The stone is believed to symbolize health, courage, and clear communication, all things that are important in any marriage, which may account for their popularity in engagement rings.

While gemstones have been used in all kinds of jewelry for centuries, many of them are also thought to be imbued with various healing properties. Some gemstones are used in healing ceremonies, while others are considered to bestow their positive characteristics simply by being worn. This, in addition to their beauty, may be part of the reason the aquamarine became a popular choice for jewelry.

The aquamarine represents the throat chakra, also called the fifth chakra, one of the seven chakras in the body through which energy flows, according to some beliefs, particularly Indian religions such as Hinduism and Buddhism. The throat chakra pertains to communication and self-expression. It's represented by the color blue, and is believed by practitioners of certain religions to be healed by blue stones, including the aquamarine.

Look through our gorgeous aquamarine engagement rings, and find the one most meaningful to you.