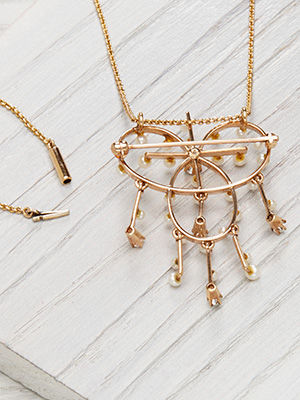 1. The Barrel Clasp - This type of clasp has been around for a long time. In antique pieces, it may exhibit changes in the shading of the metal. A tell-tale feature of an antique barrel clasp in fact may be a brassy appearance. This type of fastener gets its name from the tiny barrel that is found at both ends of the jewelry piece. These barrels typically either screw together or hook inside each other, rendering the antique necklace or bracelet extremely secure on the body. 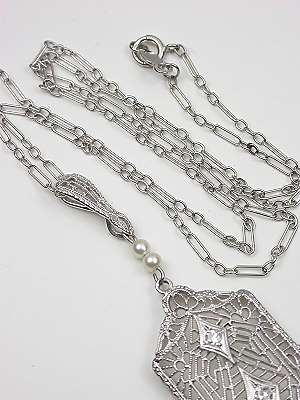 2. The Spring-Ring Clasp - This type of jewelry clasp dates back to the early 1900s, putting it in the heyday of the Victorian jewelry era. It is more commonly found on antique bracelets than necklaces. As its name implies, this jewelry fastener is circular, or ring-shaped, with a small nub poking out of it. This tiny piece of exterior metal is pulled back to open the ring, allowing the hook on the other end of the bracelet or necklace to slip inside. A spring inside the ring closes the gap automatically when the lever is released.

3. The Fishhook Clasp - Sometimes referred to as a hook and box clasp, a fishhook fastener has a dainty and elegant appeal to it. The hook end is slim and may have some scalloped notches in it that give it the appearance of an antique key. This hook is delicate for a reason. It is designed to slide inside and hook, or lock, around a decorative encasing on the other side of the jewelry piece. Often that other end will be in the shape of a fancy metallic teardrop with floral and other cutwork ornamenting it.

The fishhook clasp is a good example of a concealed clasp. What this means is that it integrates itself so well into the overall design of the jewelry that one doesn't even notice that it is there. Indeed, it can be considered an extension of the antique bracelet or necklace. Antique pearl jewelry frequently secures with a fishhook clasp. 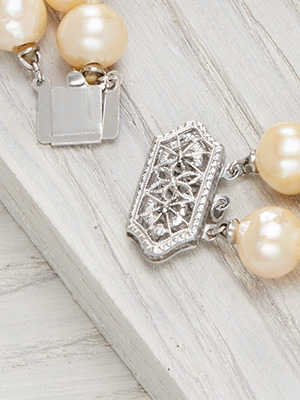 1. The Box Clasp - Jewelry with a box clasp has a decorative box on one end and a flat incline on the other that gently slopes. When pressed, a notch on the non-box side levels it off so that it slips inside the box. A safety mechanism locks the two ends in place. Vintage style tennis bracelets as well as hinged bracelets are the pieces of jewelry that are most likely to incorporate this type of fastener into their design. The box clasp may sometimes also be referred to as a tongue and groove clasp.

2. The Push Button Clasp - The push button clasp can come in a variety of forms. Watches often use this type of fastener, which folds over on itself and then locks into place. This is another example of a hidden or concealed clasp. Some push button clasps have a lever or button that must be pressed to release the closure.

3. The Hook Clasp - You may have heard this type of vintage jewelry clasp being called by the name shepherd's hook because it looks like the staff shepherds and shepherdesses are known to carry with them in the fields. Curved at the end, the hook clasp hooks on and off a loop at the other end, affording easy attachment and removal of the jewelry piece. The pinnacle of the shepherd's hook's popularity occurred in the 1950s and 1960s, making it prevalent in vintage necklaces and bracelets dating to those eras. Often those pieces had chain link extenders onto which the hook could be secured, allowing adjustability in the length. 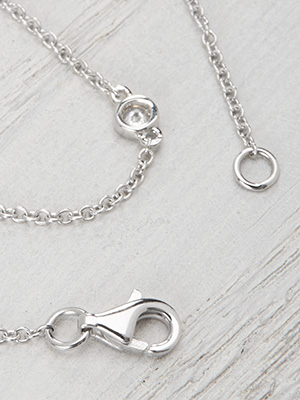 4. The Lobster Claw Clasp - A more modern variation on the spring-ring clasp, the lobster claw clasp gets its name from its Crustacean shape and the pinching motion of its fastener. Like the spring-ring clasp, a small nub poking out of the lobster claw end can be levered back and forth to attach to a ring on the other end of the jewelry piece. The lobster claw clasp made its appearance on the jewelry scene in the 1970s so it is more commonly found on Retro bracelets and necklaces. A variation on this fastener, the swivel clasp, is capable of rotating in a complete circle at its base.