Born out of necessity, the style of the '30s and '40s was like nothing that had come before it. Patriotism was the order of the day, leading to daily compromises, and some truly remarkable vintage engagement rings that were only made unique and more beautiful by jewelers' ingenuity during this time of scarcity. 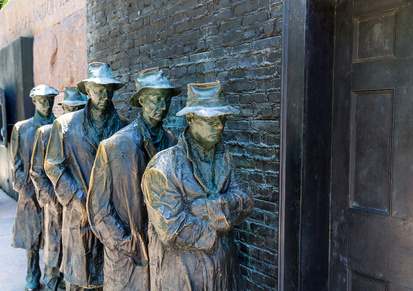 The Art Deco period came to an abrupt end with the stock market crash of October 1929. As the country was plunged into the Great Depression, which lasted through 1939, few people were concerned with fashion or jewelry, or with creating any particular style movement as had been seen in previous decades. The focus of daily life for most people was survival.

The Depression had barely ended when the world was again preoccupied with another global war. World War II began in 1939, and didn't end until 1945. During this time, many materials were classified as being of strategic value to the military, and were therefore scarce, or outright restricted from any uses other than military.

Certain foods such as meat, butter, and sugar were rationed to ensure enough subsistence could be provided to troops deployed to Europe. So that nylon could be used to make parachutes for members of the airborne forces, women gave up their stockings, opting instead for skin-colored makeup, and trompe l'oeil "seams" drawn up the backs of their legs.

This setting aside of certain materials for the war effort also affected the jewelry industry. Platinum, which had become so popular in the Edwardian and Art Deco periods, was classified by the military as a "strategic metal," and was forbidden from being used for jewelry.

Nickel, a key ingredient in the production of white gold, was also named a strategic metal. Without platinum and the ability to make white gold, yellow gold became the precious metal of choice for jewelry of the '30s and '40s.

In addition to affecting the availability of metals, the war also made certain gemstones more difficult to get. As a result, much of the jewelry from this period used rhinestones, glass, crystals, and even plastic. While diamonds were still the stones of choice for retro engagement rings, their high cost made them unaffordable for many still suffering the aftereffects of the Depression. Instead, many retro engagement rings used synthetic rubies and sapphires, or even beads and cabochons.

Where much of fashion and style influence had come from Europe in the past, with nearly the entire continent suffering the ravages of war, clothing and jewelry of this period has a more distinct American style to it. 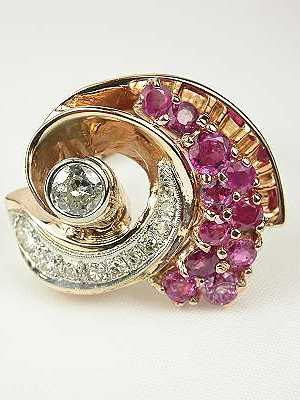 The use of less-expensive materials also allowed a sort of wartime rebellion to take place. They may have been rationing food and materials, and they may not have been able to afford precious metals and stones, but that didn't stop wartime brides from opting for large, intricate engagement rings. It was one way they could demonstrate their spirit, and their refusal to give in to the enemies threatening their way of life.

For all of these reasons, the fashions and jewelry that emerged and remain from about 1930 to 1950 are simply considered "retro," referring to the past in general rather than any specific period, influence, or artistic movement. There was much more to worry about during these years than artistry or jewelry-making.

However, this doesn't detract from the appeal or desirability of jewelry created during these two decades. Any bride choosing a retro engagement ring today is also choosing a tiny piece of history.

Shop our collection of one-of-a-kind vintage engagement rings to find the one that will become part of your personal history.